Dynamics of Dopamine Sig​naling in the Striatum
Deep within the brain, the basal ganglia are a group of nuclei that are important for many functions, including motor control, reward processing, motivation, and learning. The largest of these nuclei, the striatum, serves as the principal input, receiving and integrating widespread signals from other brain regions. The neuromodulator dopamine exerts a powerful influence on striatal signaling and can effect long-term changes. How does the striatal dopamine system support such heterogenous functions? My research uses optical techniques such as two-photon imaging and fiber photometry to investigate the spatiotemporal dynamics (the where and when and how) of dopamine signaling in the striatum and its role in these diverse cognitive and behavioral functions.

Neural Circuitry Underlying Anticipation
​Suppose you’re playing trivia and there’s a question you really want to know the answer to – knowing that you’re about to get the answer to your burning question may prepare you to pay closer attention, resulting in better subsequent memory for that trivia fact. Cognitive neuroscience studies have shown that anticipation, this state of thinking that something will happen, is an important signal that interacts with motivation to shape learning and memory(1–3). How might such motivational signals be represented in the brain? The mesolimbic dopaminergic system, which has been identified as a key mechanism of motivated behavior, may provide a clue. Classic studies have shown that dopamine neuron activity signals predictions about upcoming rewards, and subsequently the degree to which these predictions are fulfilled(4). However, while the role of the dopamine system in signaling expectations has been established, its role in the state of anticipation itself is less well-characterized. What happens in the brain as you’re getting closer to finding out the answer to your trivia question? Dopamine is a neurotransmitter whose signals are broadcast widely throughout the brain, and while there is evidence for dopaminergic signaling of anticipation(5), the broader neural circuitry supporting these states has yet to be investigated.  In a world where we are inundated with information, understanding how expectancy affects learning and its neural basis may offer insight on how to optimize learning. 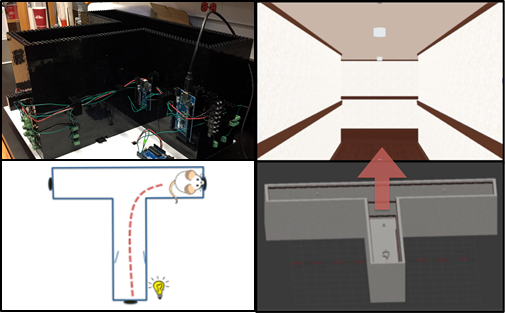 Example rodent-human translational paradigm: Lego rodent T-maze and schematic (left) and human virtual T-maze (right).
Human-Rodent Translational Investigation
My research investigates how anticipation is signaled in the brain. I take an interdisciplinary, integrative approach that combines experiments using functional magnetic resonance imaging (fMRI) in humans and in-vivo multisite electrophysiology in mice. This dual-pronged approach is important, as each prong offers different insight into the brain basis of anticipation. Humans are capable of complex, nuanced tasks, and can provide detailed subjective insight. Combined with fMRI, which records neural activity from the entire brain, such studies can relate rich behavioral data with neural signals from throughout the brain. However, this methodology is limited in temporal resolution: fMRI at its fastest can sample the brain at a rate only on the order of a second. On the other hand, rodent electrophysiology, in which neural data is recorded from awake, behaving rodents via implanted microwires, offers unparalleled temporal resolution on the order of a millisecond.  Designing parallel experiments across species and neural recording modalities enables me to leverage the strengths of each approach and draw broader inferences about the neural signal underlying anticipation. ​
1. Lisman, J. E. & Grace, A. A. The hippocampal-VTA loop: controlling the entry of information into long-term memory. Neuron 46, 703–713 (2005).
​2. Murty, V. P., LaBar, K. S. & Adcock, R. A. Distinct medial temporal networks encode surprise during motivation by reward versus punishment.Neurobiol. Learn. Mem. 134, Part A, 55–64 (2016).
3. Shohamy, D. & Adcock, R. A. Dopamine and adaptive memory. Trends Cogn. Sci. 14, 464–472 (2010).
4. Schultz, W. A Neural Substrate of Prediction and Reward. Science 275, 1593–1599 (1997).
5. Howe, M. W., Tierney, P. L., Sandberg, S. G., Phillips, P. E. M. & Graybiel, A. M. Prolonged dopamine signalling in striatum signals proximity and value of distant rewards. Nature 500, 575–579 (2013).